August 01, 2013
Welcome to Real Life. Hope. It’s priceless. Without it, I feel lost, helpless, and defeated. I've been there—hopeless. Where do I find the strength to go on when hope is gone?


The Christian life is not a constant high. I have my moments of deep discouragement. I have to go to God in prayer with tears in my eyes, and say, 'O God, forgive me,' or 'Help me.'
–Billy Graham


Jairus, a synagogue ruler, falls at Jesus’ feet and pleads, “My little daughter is dying. Please come and lay your hands on her; heal her so she can live.”

Jesus agrees to accompany Jairus to his house. A throng follows, pressing in and jostling them as they go. Hidden within the crowd is a woman. She’s suffered twelve years from a bleeding disorder. She’s exhausted her savings on physicians. Nothing has helped. Hope is gone … until she hears of Jesus’ miracles. “If I can just touch his clothes, I’ll be healed.” She pushes through the crowd and touches him.

Immediately, she feels it. The bleeding has stopped. She is whole again.

Abruptly, Jesus halts the entourage, asking, “Who touched me?”

His disciples are incredulous. “We’re in a crowd. Everyone’s touching you.” Yet, Jesus keeps scanning faces.

Trembling with fear, the woman comes forward and reveals herself. But, Jesus is not angry. His words bless and affirm, “Daughter, your faith has healed you. Go in peace and be freed from your suffering.”

In the midst of her joy, messengers arrive with dreadful news for Jairus, “Your daughter is dead. Why bother the teacher anymore?” In an instant, Jairus’s hope is gone, swallowed up in grief.

Jesus ignores the messengers. He tells Jairus, “Don’t be afraid; just believe.” (Keep hoping, man. Not even death is the end with God.) At the house, Jesus grasps the lifeless daughter’s hand and says, “Little girl, get up!” Instantly, she arises and walks. 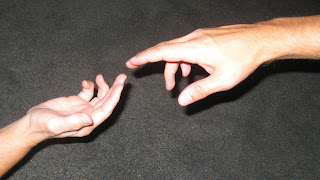 When I pour out my problems to Jesus, he tells me, “Don’t be afraid; just believe.”

I don’t have the strength, wisdom, and resources to overcome all the problems that gang up to defeat me. But, I know the One who does. In his presence, by his touch, troubles disappear. Hope is restored! Nothing is impossible.


“Daughter, your faith has healed you. Go in peace and be freed from your suffering.”