December 01, 2021
Welcome to Real Life. God often shows up in the unexpected.

We must stop regarding unpleasant or
unexpected things as interruptions of real life.
The truth is interruptions are real life.
—C.S. Lewis
I wonder about Joseph before he was engaged to Mary. Did he have his future all planned out? Marry a godly woman, raise a bunch of kids, and grow old together in the neighborhood where he grew up.

But then, life happens. Plans wave goodbye. Even before the wedding, Joseph learns his fiancé is pregnant—and it’s not his baby. He likely wrestled through jealousy, anger, and grief, before deciding to quietly break off the engagement. How could he trust a woman who was unfaithful before the wedding even took place? Joseph falls asleep, but doesn’t rest. For God sends a messenger.

Joseph, son of David, do not be afraid to take Mary as your wife. For the child within her was conceived by the Holy Spirit. And she will have a son, and you are to name him Jesus, for he will save his people from their sins.[1]


“I’m in this!” God reassures Joseph. And thereby, he prevents Joseph from making the worst decision ever—breaking off his engagement with Mary. But even though this was God’s will and plan, it was not easy. The first child born in Joseph’s house wasn’t his. And the birth took place far from home in an animal stall (of all places). From there, the young family was forced to flee for their lives to Egypt. Where for three years they raised their first child alone without the support of family or friends.

The Lord asked much of Joseph, but gave him far greater in return. For Joseph alone had the privilege of fathering the Messiah. He could have refused and said, “No. I won’t raise a child who is not mine.” Instead, he believed and received this incredible gift! 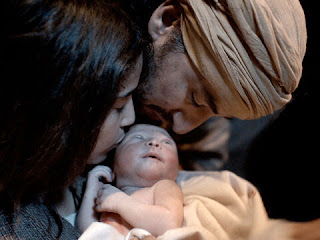 Some of us are facing unexpected and difficult circumstances: a diagnosis, a pregnancy, a divorce, a sudden death, a job loss. Honestly, I get frustrated when an unexpected phone call interrupts my day. And then, of course, the pandemic continues to rearrange our calendars. The reality is life rarely goes according to our carefully-laid plans.

In the midst of unexpected and difficult circumstances, we can gain courage from Joseph. He did not give up or walk away. As children of God, nothing touches our lives apart from his sovereign will, his plan. While God may not be the author of our unexpected circumstances (as he was in Joseph’s), we can rest assured he is present with us in their midst. Nothing takes the Lord by surprise.

Remember this. God’s plan for Joseph was far better than anything he could conceive for himself. The same is true of us. Don’t give up. Don’t walk away. For when we willingly surrender our plans and embrace God’s, we will inherit his blessing!

Father God,
Increase our faith.
Please reveal yourself in our unexpected circumstances,
Empower us to persevere, embrace your will,
And believe we will inherit your blessing!
In Jesus’ name we pray. Amen.


Take it further. Read Matthew 1:18–25 (NLT):
This is how Jesus the Messiah was born. His mother, Mary, was engaged to be married to Joseph. But before the marriage took place, while she was still a virgin, she became pregnant through the power of the Holy Spirit. Joseph, to whom she was engaged, was a righteous man and did not want to disgrace her publicly, so he decided to break the engagement quietly.

As he considered this, an angel of the Lord appeared to him in a dream. “Joseph, son of David,” the angel said, “do not be afraid to take Mary as your wife. For the child within her was conceived by the Holy Spirit. And she will have a son, and you are to name him Jesus, for he will save his people from their sins.”

All of this occurred to fulfill the Lord’s message through his prophet: “Look! The virgin will conceive a child! She will give birth to a son, and they will call him Immanuel, which means ‘God is with us.’”

When Joseph woke up, he did as the angel of the Lord commanded and took Mary as his wife. But he did not have sexual relations with her until her son was born. And Joseph named him Jesus.