Today, If We Hear His Voice | Hebrews 3

April 24, 2019
Welcome to Real Life. In a noisy world, we tune out voices. Politician. Parent. Boss.


At the sound of her voice, I switched stations. Nancy’s  Revive Our Hearts program replaced Elizabeth Elliot’s when she retired. Young Nancy couldn’t match Elizabeth’s wisdom and experience. I tuned her out.

Fast forward a few years. I work at Moody Radio. Revive Our Hearts airs on their network. At work, when I heard Nancy's voice, I couldn't switch stations. I grew to love and respect her voice. I even traveled to Indianapolis to attend Nancy's True Woman Conference.

Today, if you hear his voice,
do not harden your hearts
as you did in the rebellion,
during the time of testing in the wilderness.
Hebrews 3:7-8 NIV

1500 BC. Israel is perched at the border of the Promised Land. “Go! The land is yours,” says the Lord.

“But giants dwell in the land. They’ll devour us,” Israel resists. God rescued them from Egyptian bondage, parted the Red Sea, showered manna from heaven. None of it mattered. They saw giants! Fear and unbelief shut their ears and hardened their hearts.

Don't giants always stand between us and our God-given dreams? “I’m not good enough, strong enough, spiritual enough to live out God’s call. The giants will swallow me for breakfast,” Fear whispers. Today, it's our choice. Listen and obey God. Suit up for battle. Face the giant. Or allow fear and unbelief to shut our ears and harden our hearts.

I battle giant discouragement regularly—especially as a writer. “Should I just quit writing, Lord? I’m not good enough. Should I walk away?” I asked him a week or so ago.

Like Israel, I forget. The battle isn’t ours. It’s the Lord’s. I'm not good, strong, or spiritual enough. Thankfully, I don’t need to be. God asks one thing—faith. If we believe, we will listen and obey. God does the heavy lifting. We're simply along for the (blessing of the) ride.

And if we lack faith? Keep listening. God speaks most clearly through his Word—the Bible. The more we listen, the more faith grows. Tune in to God’s voice. Don’t switch stations!


So then faith comes by hearing, and hearing by the word of God.
Romans 10:17 NKJV

Back to Israel… Forty years later, the giant-fearing, faithless generation died in the wilderness. God Almighty—and faithful Joshua—lead Israel into the Promised Land. The walls of Jericho fall. No one raises a sword. No one is devoured by a giant.

After asking, “Should I quit?” I hear this song on the radio:

As I listen, the Lord reminds me of the impossible battles he’s won in my past. Then later, I read: 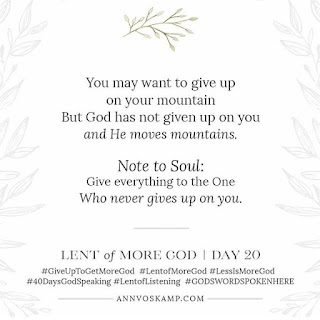 God is with us. He hasn’t given up. Today, when you hear his voice, open your heart. Let's not give up. Or switch stations. Let's listen and obey.

Lord God,
Give us faith to face giants,
Believe you still move mountains,
And know you’re with us every step of the way.
In Jesus’ name we pray, Amen.

Take it Further... Listen to "Do It Again" by Elevation Worship.

A shout out to my latest email followers! Thanks so much! You have encouraged me.