"Doubt is but another element of faith." —St. Augustine of Hippo


He should have believed. He was a disciple who followed Christ for three years—learning, talking, watching. Yet, when the other disciples told him that Jesus was alive, Thomas wouldn't buy it. In fact, he went so far as to say,


“Unless I see the nail marks in his hands and put my finger where the nails were, and put my hand into his side, I will not believe.”

What drove Thomas's skepticism? He knew these men well. They were men of integrity who told the truth. Why would they lie? In addition, Thomas witnessed Jesus raising Lazarus from the dead. So, why was it so hard for him to believe that his Lord had risen from the dead?

Perhaps, Thomas was afraid to hope. He watched the man whom he had followed and respected being arrested, beaten, and humiliated. Then, he watched Jesus die. Maybe the words of the mockers echoed in his mind: “You saved others. Save yourself and come down off the cross if you are the Messiah!” 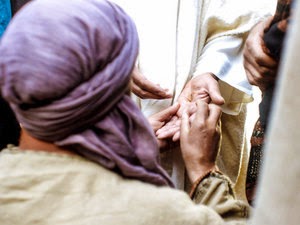 Whatever the reason, one week later, Thomas's doubt was completely obliterated. For, his Lord appeared again—for Thomas’s sake. Jesus was not offended by his doubt. He loved Thomas. He said,


“Put your finger here; see my hands. Reach out your hand and put it into my side. Stop doubting and believe.”

Thomas said to him, “My Lord and my God!”

I’m encouraged by Jesus’ response to Thomas. For, I too doubt at times. A reasonable, informed faith will wrestle with doubt. Still, Jesus loves me as he loved Thomas. And, when I sincerely seek God, I find him. No, I've never touched his nail-scarred hands. Yet, I know he is alive and present with me even now. For…


God rewards those who diligently seek him. (Hebrews 11:6c)

Wrestling doubt? Visit:
Lee Strobel was a skeptic who was determined to disprove Christianity. Instead, he found overwhelming evidence to prove that Jesus is Messiah. Strobel is now a Christian. Read about his journey in:
Image from:  http://freebibleimages.org/photos/jesus-appears-thomas/
appearances of Jesus doubt doubting Thomas faith Jesus is God