“Teacher, this woman was caught in the act of adultery. In the Law, Moses commanded us to stone such women. Now, what do you say?”

Jesus’ radical teachings on love and grace infuriated the teachers of the Law and the Pharisees. They had religion down to a neat formula. Obey this, sacrifice that, give so much and you've fulfilled your obligation to God. Jesus messed with their system. (How can you quantify love and grace?) And, the religious leaders didn't like it one bit. If they could just catch Jesus directly contradicting the Law of Moses, they’d have something concrete to condemn him with. 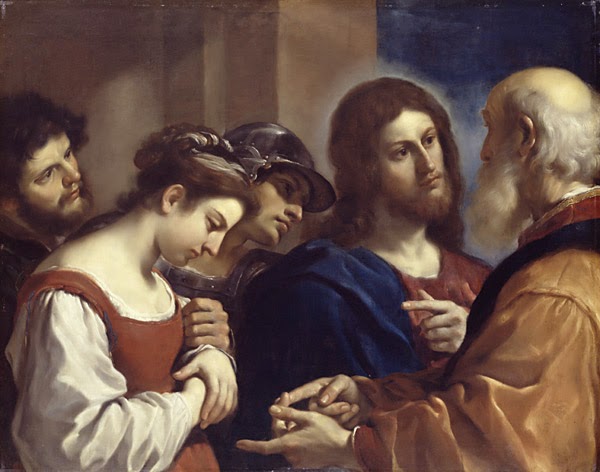 So, while Jesus is teaching in the temple courts, they interrupt the lesson. They drag this poor woman before him. She’s guilty—no doubt—caught in the very act of adultery. What will Jesus do? Will he uphold the Law?

But, Jesus won’t play their game. In fact, he won't even answer. Instead, he stoops down and writes on the ground with his finger. When the accusers keep accusing, Jesus finally stands to his feet and says,


“Let any one of you who is without sin be the first to throw a stone at her.”

And again, he stoops down and writes on the ground. One by one, they walk away, beginning with the oldest, until only Jesus is left.

“Woman, where are they? Has no one condemned you?”

It doesn't surprise me that the oldest left first. The longer I live, the more selfish, ugly deeds I've racked up. The less I need convincing: I’m a sinner in desperate need of God’s grace.

Why, then, am I so stingy in giving grace? Why so quick to throw stones? I magnify other’s faults and excuse my own. I want to be Jesus in this story—kind, calm, wise, full of grace. But more often, I’m the accuser… or, the guilty one caught in the act.

In the end, only Jesus remains with the woman. The accusers are long gone. Only Jesus is without sin. Only He is worthy to throw a stone. And, he doesn't. Though, neither does he excuse her sin. He says, “Go and sin no more.”

For God did not send his Son into the world to condemn the world, but to save the world through him.
John 3:17


Dear Jesus, thank you for saving—and not condemning me.
Please grow, expand my heart so that grace flows freely.
I want a beautiful heart like yours.


The most remarkable point of this story is that Jesus exalts himself above the Law of Moses, changes its appointed punishment, and reestablishes righteousness on the foundation of grace. I don't doubt that this is why the story was preserved. It is an amazing story.

Jesus forced Pharisees to expose their own misuse of the law. They all walked away. The point is not that judges and executioners must be sinless. The point is that righteousness and justice should be founded on a gracious spirit, and if it's not, what you get is the heartlessness and hypocrisy of Pharisaism. That's the point throughout the Gospels, not just here.

The story points us to the message of the whole New Testament: We are called to be holy as God is holy. God hates sin. But pursuing holiness without a profound experience of grace in our own lives produces hypocrisy and doctrinaire cruelty. Jesus came into the world to provide that grace through his cross, and to establish holiness, righteousness, and justice on the foundation of our experience of his grace. So come to him for grace, and set your face to sin no more.
Read more.

Scene from the movie The Gospel of John.