They Misspelled Our Name

Before my mom passed away, she assumed we’d visit her grave often. “It’s near the shopping center. You can stop by to see me before you buy groceries,” she used to say, as if we were going to sit down for coffee and donuts with her at the cemetery. But, after she died, the thought of going to her grave made my heart ache. So, I didn't go.

However, as summer was ending, I felt an obligation to take my father to the cemetery before the weather changed. I knew that if dementia had not impaired his memory, he would have asked me to take him. I decided to ask him, “Do you want to visit Mom’s grave?”

It’s hard to know how much Dad remembers. He knows Mom is gone. She no longer shares his room at the nursing home. I posted her obituary near his bed, to help him remember. Her framed pictures crowd his nightstand. The glass over her face is continually smudged from his kisses.

I worried about his reaction to his wife’s death. Before she died, they were so close, inseparable even. The older and frailer they grew, the more they relied on each other. In the weeks after her death, he kept asking, “Where’s Mom?” I was grateful when he stopped asking. He seemed to adjust to her absence. He even began enjoying the social activities at the care center. I assumed he knew she was dead. His question, “Momma zomrela?” took me by surprise.

“Yes, we should go to the cemetery,” he said. Then, I worried about how he'd react to seeing her grave. The image of him sobbing and hugging her lifeless body in the casket at the funeral home is burned in my memory. 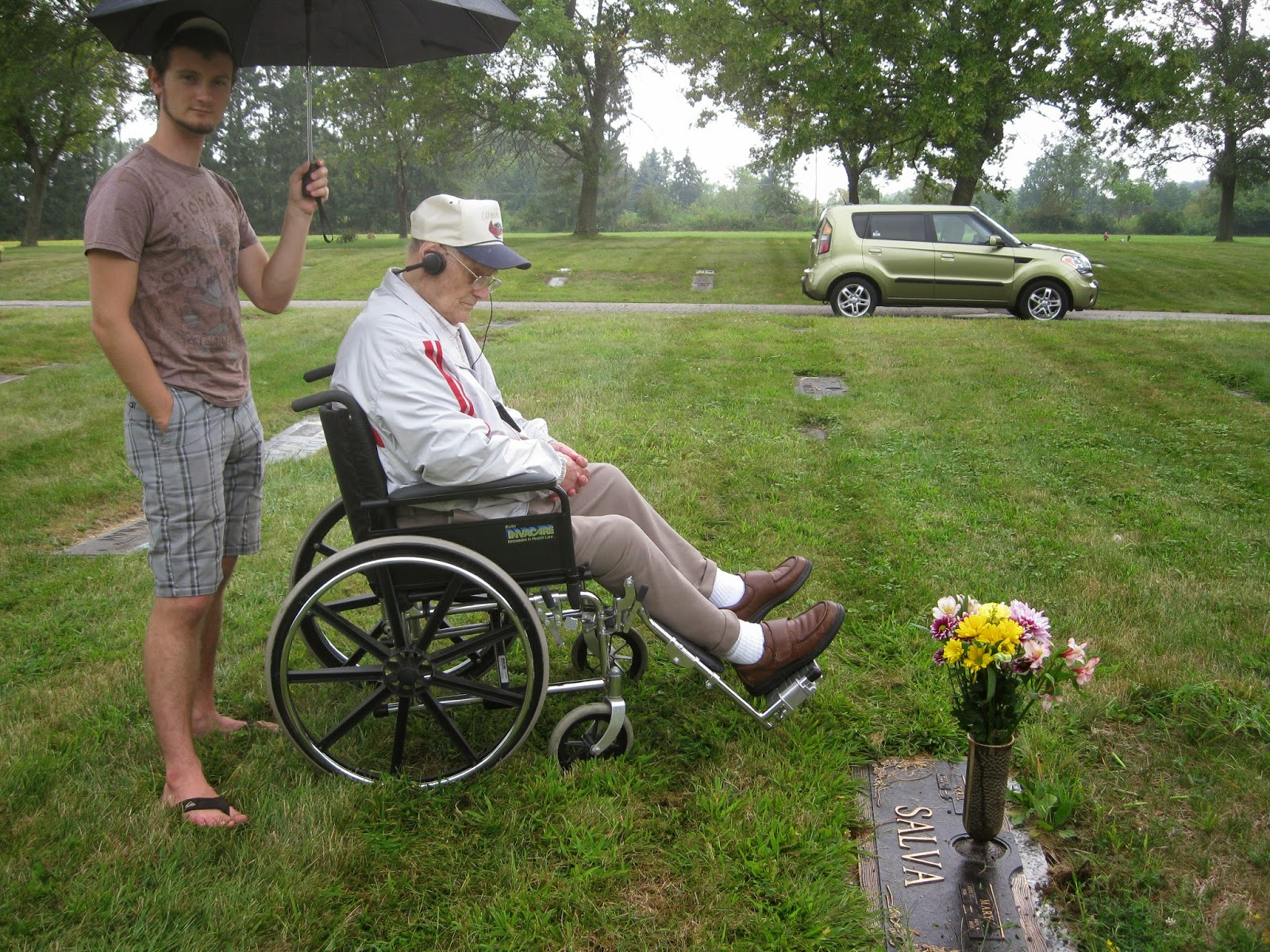 My son accompanied us. He pulled his grandpa’s wheelchair backwards over uneven grass to the graveside. When my father saw her headstone, he read it out loud. As I arranged the flowers we brought, he smiled, “Mom would like them.” Then, he bowed his head, closed his eyes, and clasped his hands in prayer. A gentle drizzle began. The tiny droplets mingled with my tears.

After a while, I pointed out the statue of Jesus with arms outstretched that stood nearby. I reminded him of the day we picked out the cemetery plots. Mom adored the statue. She wanted to rest under Jesus’s loving arms.

“Mom’s not here, you know. It’s only her body. She’s with Jesus,” I reminded my father.

Then, his countenance lightened. Feigning offense, he said, “Hey, they misspelled our last name on the headstone. It should be Slava, not Salva.” (Slava means glory in Slovak, inferring that he’s pretty awesome!)

As my son wheeled him to the car, my father was still grinning over his clever play on words. I could almost see Mom looking down from heaven, rolling her eyes, and saying, “Oh, Cyril.” I smiled. Dad would be just fine.

I wrote this last September 2013. A year and a half after my mom died, my father, Cyril Salva, quietly left this world for heaven and was reunited with his beloved Mary on June 28, 2014. He was almost 95.