Commander of the Lord’s Army | Joshua 5

Joshua is ready to launch the campaign for the Promised Land. First stop: Jericho, a walled city, difficult to penetrate. The Israelites had no experience attacking a fortified city. It didn't matter. The victory was theirs. The Lord promised. They just had to show up. As Joshua neared Jericho …


He looked up and saw a man standing in front of him with a drawn sword in his hand. Joshua went up to him and asked, “Are you for us or for our enemies?”

“Neither,” he replied, “but as commander of the army of the Lord I have now come.” Then Joshua fell face down to the ground in reverence, and asked him, “What message does my Lord have for his servant?”

The commander of the Lord’s army replied, “Take off your sandals, for the place where you are standing is holy.” And Joshua did so. (Joshua 5:13-15) 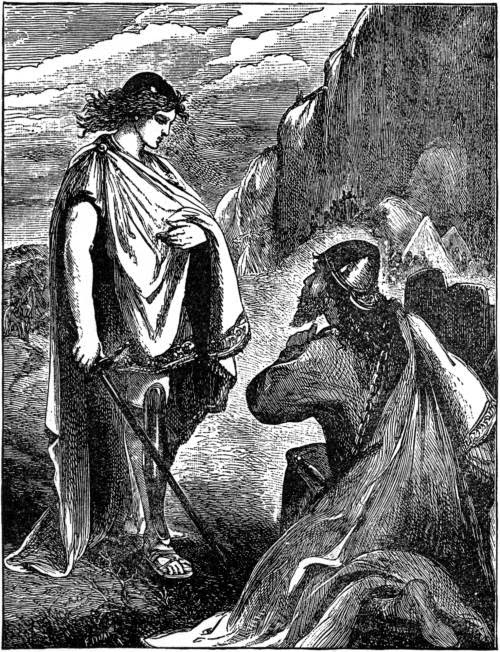 This is no mere man. When Joshua encounters the commander of the Lord’s army,[1] he hits the dirt, face down, in reverence. He’s on holy ground.[2]

The commander’s response, “Neither,” startles me. Isn't God for his people? Yes, he is. However, this commander is under God’s orders, not Joshua’s. Ultimately, the battles ahead were God’s, not Israel’s.

Like Joshua, I want God to get on my side, fight my battle, get on my agenda. He won’t. He is God. It's up to me to get on his agenda. I concoct all sorts of grand plans that I want to accomplish for God. I did it just this morning (even though he’s called me to a season of quiet and rest this summer). It’s easier to get moving and serving then to get quiet before the Lord and listen to his heart.

Before Joshua leads the attack against Jericho, he must stop, worship, and listen. God’s plans are often vastly different from our own. He gives Joshua specific instructions: March the army around Jericho seven days. On the seventh day, circle seven times. Then, sound the trumpet, shout, and the city wall will collapse. Really, God? I bet those Israeli soldiers felt foolish. But, it worked. Joshua succeeded, because he got on God’s agenda.

If I want to successfully fulfill God’s will, I need to do the same—even if it feels a bit foolish or counter-productive. He can accomplish far more through me at rest, than I can in all my striving. “This foolish plan of God is wiser than the wisest of human plans, and God’s weakness is stronger than the greatest of human strength” (1 Corinthians 1:25 NLT).

I don’t need God on my side. I need to get on his.


Lord Jesus, give me ears to hear, eyes to see, and a heart to obey you.

"The Captain of the Lord's Host" image from Mother Stories from the Old Testament, http://www.gutenberg.org/files/17162/17162-h/17162-h.htm
[1] This commander may have even been the Lord himself in human form (a theophany).
[2] Compare with Exodus 3:5 where the Lord appeared to Moses in the burning bush.