June 28, 2012
Welcome to Real Life. Once in a while, I read a story in the Bible that breaks God out of the neat little box I try to put him in. This is one of those stories.

Jacob is the third great patriarch of Israel. However unlike his noble father Isaac and grandfather Abraham, Jacob is somewhat of a shuckster. He’s willing to use underhanded methods to gain an advantage. His very name means “deceiver.” He tempts his ravenously hungry twin brother Esau into trading his birthright[1] for a bowl of stew. Then he steals Esau’s blessing by deceiving his elderly father. Twice cheated, Esau’s angry enough to kill. So Jacob flees to his uncle’s in Haran.[2]

Turnabout is fair play. In Haran, his uncle Laban tricks Jacob into marrying both of his daughters. Nephew and uncle continue to battle in the family business, scheming against each other, each trying to gain an advantage. After twenty years, Jacob’s had enough. He heads home to Canaan, taking the wives, children, servants, flocks and herds that he’s acquired while in Haran.

However, now he must face Esau. Will his brother still seek revenge? On the journey home, Jacob sends messengers ahead to let Esau know he’s coming. Word returns. Esau’s riding out to meet him with an army of 400 men. Jacob’s terrified. He quickly gathers flocks and sends them ahead as a lavish gift to appease his brother. Though it’s already dark, he ferries the rest of his household across the river Jabbok. Then, Jacob re-crosses the river and returns to an empty camp. He needs to be alone. 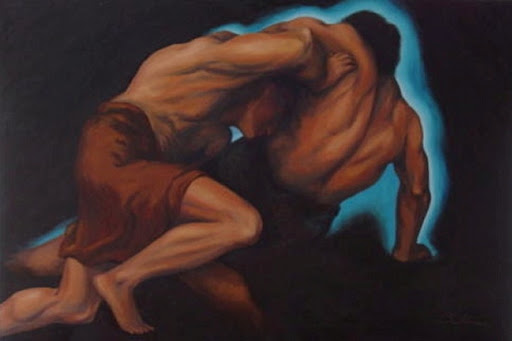 But, deep in the night, a stranger appears. He wrestles Jacob. They tumble about for hours. At one point, the man dislocates Jacob’s hip. Dawn is breaking. The stranger asks Jacob to let him go. Jacob answers, “I will not let you go until you bless me.”

Who is this stranger? He changes Jacob’s name to Israel which means[3] “he struggles with God.” Jacob calls the place Peniel or “face of God.” Obviously, the stranger is God. Jacob came face to face and skin to skin with God (and lived to tell about it).

This is where God breaks out of my box. I can’t imagine the Almighty wrestling Jacob, tumbling about, knocking things over and getting sweaty and dirty. Certainly, the Lord could have overpowered Jacob. Yet, he didn't. He allowed Jacob to gain the final advantage. Why? What is this all about?

I’ve wrestled with God over this story for weeks. A few times, I thought I gained the upper hand. I thought I had it figured out. Then, my understanding would slip away in the unusual details. I’d wrestle some more. Just the other day, God gave me a victory by revealing a simple lesson.

He wants me to wrestle with him.

Yes, wrestling is messy, sweaty and dirty. But, it brings me face to face and skin to skin with my God. It takes passion to wrestle. I have to care enough to keep fighting until victory is won. A faith that wrestles grows in strength.

I care. I want to know God intimately. I want to understand his ways. But, I’d rather not wrestle. I’d rather not get sweaty and dirty. I prefer a neat, easy life. Still, I’m willing to enter messy territory–to grapple with questions, misconceptions, doubts, and fears–to gain his blessing. As we tumble around, the nice box I've put God into gets smashed to pieces. I walk (or limp) away exhausted, yet transformed. Back in Peniel, the sun rises. Jacob sees Esau and his men on the horizon. As he gets closer, Jacob humbly bows to the ground seven times …
Then Esau runs to meet him and embraces him, throws his arms around his neck, and kisses him.
And they both weep.[4]

Taking it further …
[1] In their culture, the firstborn son inherited the majority of the father’s wealth.
[2] On the way, he dreams of a stairway to heaven. See last week’s post.
[3] Scholars are unsure of the exact translation of what Israel means. Other suggested meanings: God fights, he wrestles with God, he rules with God, God rules, he’s been saved by God.
[4] Genesis 33:4 (verb tense changed)
Wrestling image: http://zhishan.files.wordpress.com/2010/08/wrestle-with-god1.jpg
Embrace image: https://encrypted-tbn1.google.com/images?q=tbn:ANd9GcTa4SdBlJ9ByEh2qmVlP0PGiyf0tYkoXyxL01LbmfVfm6sO-qjf