Showing posts from November, 2020
Show all 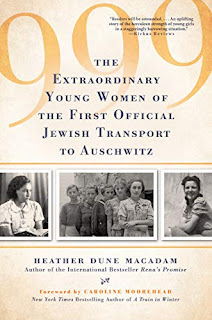 Welcome to Real Life . Some stories, though horrendous, must be told.  People are still writing about the Holocaust? That was my first thought when my friend Michelle texted me this image of the book she was reading. Two previously unknown facts about the Holocaust piqued my interest. First, the transport was from Slovakia. As a daughter of Slovak immigrants, everything about Slovakia interests me. And second, the transport contained women, 999 of them, ages 16–36. As a woman, I was curious about their experiences.  The edict was announced February 28, 1942. In select Slovak cities, single Jewish females ages 16-36 were to report for three months of government work. Though disconcerting to Jewish parents, remember, this was new. There had been no transports to concentration camps. It was rumored the girls would work at a Slovak shoe factory. As anti-Semitism increased, some Jewish families considered this an opportunity to prove their patriotism and support their government. Few of the
2 comments
Read more
More posts