December 13, 2012
Welcome to Real Life. Faith. Over and over again in the Word of God, we see the pivotal role of faith. Without faith, it’s impossible to please God.[1] 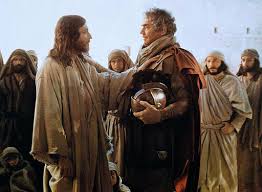 It seems natural that God’s people would possess the greatest amount of this precious commodity. Yet, that’s not always the case. On an ordinary day during Jesus’ earthly ministry, he is approached by a centurion. The man’s definitely not Jewish. He is a Roman military officer with 100 soldiers in his charge. Though an outsider, he seeks Jesus’ help on behalf of a paralyzed servant who is suffering terribly. The centurion’s request is both humble and bold. It takes humility to admit you need help. It takes boldness to ask. Though he’s tough enough to be a military officer, he’s tender enough to care about someone in pain. His concern moves him to venture beyond his sphere of influence to seek an impossible cure.

Jesus is ready and willing to accompany the centurion. But surprisingly, the man stops him. “Lord, I do not deserve to have you come under my roof. But just say the word, and my servant will be healed.”

This centurion represents the hated Roman regime that conquered and is oppressing Israel. He's a gentile, a pagan. A Jew could be rendered “unclean” just by entering his home. The man recognizes that he is clearly unworthy of Jesus’ time and attention. Moreover, the centurion is a leader who understands authority. He only has to say a word to send soldiers scrambling to fulfill his will. His response reveals his belief that Jesus holds a position of supernatural authority and power.

In the entire nation of Israel, Jesus has not found anyone who possesses such faith. God’s own people should have recognized God’s own presence, power and authority manifest in Christ. They had the testimony of the patriarchs and the prophets. They owned the history of God’s supernatural intervention in the affairs of men. Still, the majority of God’s people did not recognize God when he put on flesh and walked among them. Somehow this pagan could see what God’s people could not. Jesus is astonished by his faith!


“...many will come from the east and the west, and will take their places at the feast with Abraham, Isaac and Jacob in the kingdom of heaven. But the subjects of the kingdom will be thrown outside, into the darkness, where there will be weeping and gnashing of teeth.”

The declaration is sobering, especially for those raised in the church. Our heritage does not save us. Salvation is gift each one must receive by faith in Christ.

In the end, Jesus rewards the centurion’s faith. “Go! It will be done just as you believed it would.” The servant is healed that very hour.

Jesus' final words raise more questions than answers. Lord, are my prayers answered based on the amount of my faith or on your authority? It is the age-old debate between God’s sovereignty and man’s will. Though the story does not give a definitive answer, it does reveal that my faith can bless and even amaze my Lord. It also reveals that faith does influence how God chooses to answer prayer. Consider these additional examples:
Lord, you know that I cannot create enough faith within myself to amaze you. Even faith is a gift from your hand. Please, increase mine. May I - like the centurion - be absolutely convinced of your power and authority to do the impossible.

[1] Hebrews  11:6
Image of Jesus with Centurion is from the film Jesus of Nazareth.

Welcome to Real Life. Mark and Rita fell in love, married, and had two children. Then, Mark met Beth. They ended up having an affair. Mark left his family and married Beth. Eight months later, Mark had a life-altering stroke. This is Beth and Rita’s story of grace.

I made a decision to accept Jesus as my Savior when I was a young teenager. However, I didn’t really know what that meant. I didn’t understand salvation or grace. I knew God, but kept my distance from him. I felt like I was too far gone. I wasn’t worthy of his forgiveness.

When I met Mark, I was rebounding from a long, unhealthy relationship. Ironically, what drew me to him was the way he interacted with his family. Mark was and is a patient, loving father. I saw the special relationship he had with his children. As we began the affair, I was racked with guilt. I consoled myself with the thought that he was the one sinning, not me. He was the married one. I was single.

Eventually, our affair led to the demise of his ma…
Read more