November 17, 2011
Welcome to Real Life.  Currently, the weather in Northeast Ohio is transitioning from autumn to winter.  The leaves have fallen from the trees, except for one tree…

Just last week, my neighbor’s maple reached her zenith of color in an explosion of crimson leaves. On a sunny day against a deep blue sky, her beauty takes my breath away. She’s a stubborn tree.  She’s always the last one in the neighborhood to shed her leaves.  Even when winter winds blow and snow blankets the ground beneath her branches, this maple clings to life.  She’s an uncommon tree. 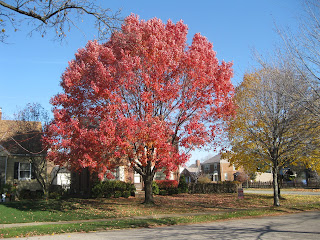 I want to be like that maple, Lord.  At times, life’s harsh winds blow turning my world into a cold, dark winter.  Give me a stubborn faith that clings to beauty and truth.  I want to be an uncommon woman.  I want the Real Life you give.

Oh, the joys of those who do not follow the advice of the wicked,
or stand around with sinners, or join in with mockers.
But they delight in the law of the Lord,
meditating on it day and night.
They are like trees planted along the riverbank,
bearing fruit each season.
Their leaves never wither,
and they prosper in all they do.
Psalm 1:1-3 NIV